Timeshare companies are going well beyond recycling programs and biodegradable straws in the search for energy and water efficiency, sustainability, and conservation. Along the way, they’re realizing that such initiatives can make them greener in more ways than one. 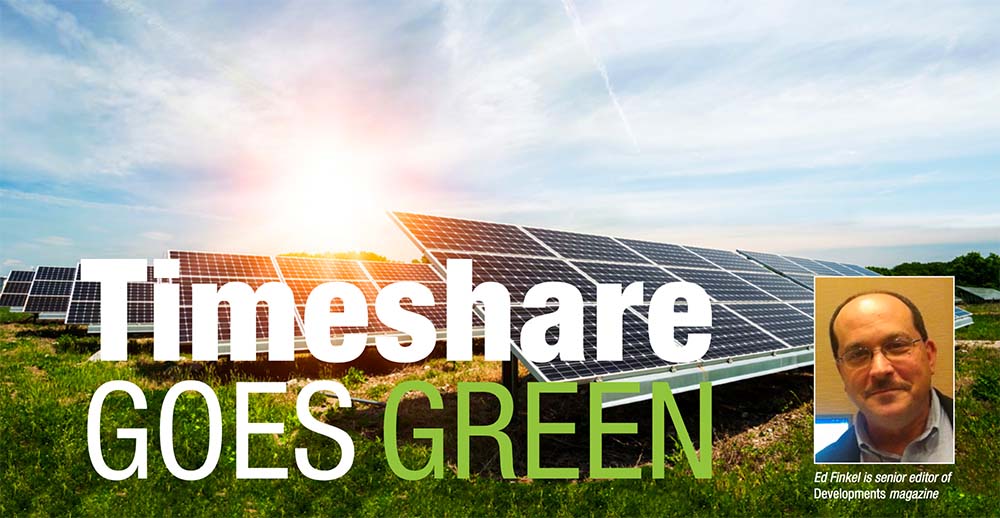 Rhiannon Jacobsen of the U.S. Green Building Council said she sees continued progress in the sector, noting that more than 1,000 hotel or resort projects are LEED (Leadership in Energy and Environmental Design) certified by the USGBC, of which more than 600 are in the U.S. The USGBC does not break down those statistics into timeshare versus other types of properties, said Jacobsen, managing director, U.S. market transformation and development.

“Hospitality is definitely moving forward,” she said. “We are seeing more and more properties move through the LEED certification process, measuring energy, water, and waste.” She added that while people are most aware of timeshare brands, it’s vital that all parties be involved in such conversations. “We want the owners to be present,” Jacobsen said.

Although its core business for the past 37 years has revolved around managing timeshare properties, Lemonjuice Capital and Solutions possesses the additional competency of restructuring legacy properties that don’t function as well for timeshare anymore and returning them to a more traditional real estate model, said Scott MacGregor, executive vice president and chief operating officer. That, in return, leads to energy efficiencies.

“We’re dealing with old buildings that, by their nature, tend to be very inefficient,” he said, adding that aged resorts tend to lack capital reserve funds, which can make reengineering a facility more difficult despite the desire to be more efficient. Lemonjuice itself handles a certain amount of this, replacing features like windows and HVAC systems to prepare properties to be sold, although that is done “as we go, and not at scale,” MacGregor said.

But what Lemonjuice doesn’t bring up to date, the new buyers of the properties end up doing, some- times based on regulatory requirements.

“Out of necessity, they are substantially reinvesting in those projects to bring them up to better operating standards for their new business model,” he said. “Our business model is providing an opportunity for a new level of reinvestment in these properties when they’re trying to make budget from year to year, dealing with whatever they can from owner reassessments.”

Lemonjuice is also mindful of sustainable features at the properties the company manages, MacGregor said. “Like everybody else, we’re trying to use the green chemicals in our housekeeping, [and other] green and recyclable materials,” he said. “These bigger systemic fixes of changing out the energy systems or the HVAC systems within the properties takes a multiyear plan and commitment to make that happen.”

A companywide initiative called “All LED by 2023” will have an all-encompassing impact, MacGregor believes. “I’m talking about parking-lot lights, safety lights in the hallways, when we’re replacing light bulbs in units or common elements as they go [out], we’re upgrading to LED,” he said. “We’re challenging resort managers to find components in their property that they might not think about and put them into budgeting for the next couple of years — that we’re going to be proactively replacing things, not because they’re at the end of their useful life but because it’s part of this initiative. ... It’s a fairly big undertaking.”

The All LED initiative began at the Bay Club Resort in Ocean City, Maryland, a 60-unit legacy property that Lemonjuice manages, half of which is being converted to luxury ownership condominiums, MacGregor said. The company is doing a full-blown engineering study of the project and figures to be replacing all the windows and sliding-glass doors.

“It’s a multimillion-dollar undertaking to get them up to modern standards,” he said. “In that process, we’re evaluating all the energy efficiency we can do. We’ll be installing HVAC shutoff switches so that if people leave their doors open, they’re not running the air-conditioner out of the room. ... I’m going through the property at a very detailed level, with parking lights, and emergency lights in the stairwells. In some of the common areas, we’re installing motion-sensor switches, if we don’t need lighting constantly for safety reasons.”

You can read the full article by Ed Finkel here.